Time to submit your films to the 5th Annual Carrboro Film Fest!

Yep, it is time for you budding film makers to get your films in for review.   We are now accepting early submissions with special early entry pricing - up to 4 films for $20! After August 20th - $25 per submission, so submit early and save!
Submission deadline is September 30, 2010.
Rules?  To enter, you must have breathed in the good air of Orange County, NC, USA sometime in your life.  The film should be less than 20 minutes long (the average length is normally 8-9 minutes with many only a minute or two).  Animated, documentary, comedy, experimental, whatevah!  We also encourage student films.

Go to the Film Fest website to download the entry form and also to see all the rules and details.  For you Facebookers please join the Carrboro Film Festival group to keep up with what's happening.

And everybody put Sunday November 21st, 2010 from 1-7 pm on your calendar.  As always, the festival is held at the Carrboro Century Center, 100 N. Greensboro.  Ticket prices are $7 -- a true budget friendly bargain!  As an attendee you'll get to vote on some of the awards so put your film critic hat on.

Below you'll see the very cool short Film Fest promo video and the also very hip Film Fest poster.  Oh yeah, the Playbill you'll receive when you attend the festival will be a nifty collectible! 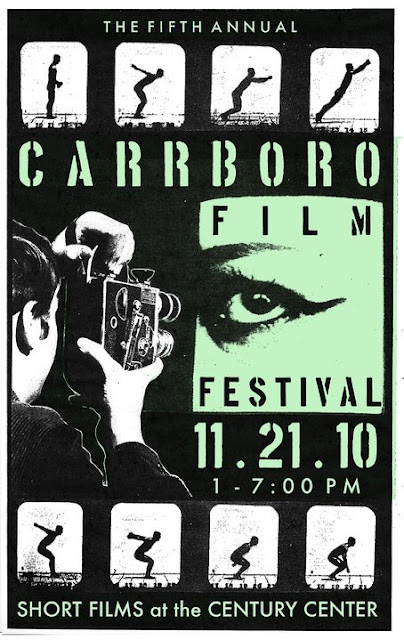 Posted by Chris Beacham at 8:17 AM