Okay, that's something of an overstatement but Uliveandyouburn, the nom de plume of Raleigh graffiti artist Joseph Carnevale, certainly caused a ruckus with his Barrel Monster creature constructed of, ah, borrowed orange construction barrels. Since the monster's creation and Joseph's arrest, he's been on NPR, discussed on national news and become a worldwide celebrity -- or had at least a good 15 minutes of fame. Good for Joseph! 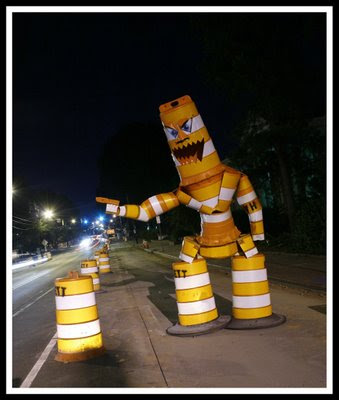 I'm guessing rights to this photo are with Joseph and WWW.NOPROMISEOFSAFETY.COM but it could be the N&O newspaper

Posted by Chris Beacham at 8:18 AM