Saxapahaw the next Austin? Washington Post on my old stomping grounds

As many of you know (and I've mentioned before) Saxapahaw is a small unincorporated town just over the county line from Orange into Alamance.  It's an old textile mill town in North Carolina west of Chapel Hill and Carrboro.  Saxapahaw Lake and the dam that provided energy to the mill are still intact. 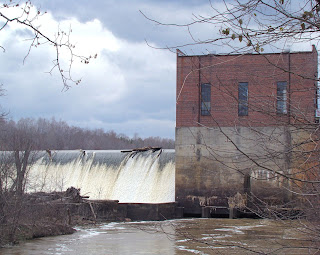 In 2006 two of the old mill buildings were converted to apartments and I lived for a while in a studio loft in the smaller building.  After that I moved to one of the old mill houses where the workers used to live.  The main textile mill building was still a wreck, damaged in a 1994 tornado and later by neglect.  I watched the Paperhand Puppet Intervention practice inside the dilapidated space once.  Here are a few pictures of the back of the building before the renovation. 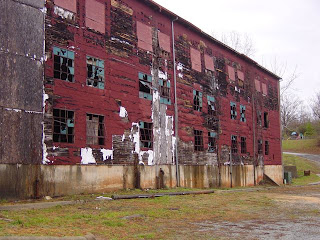 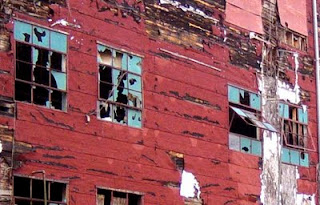 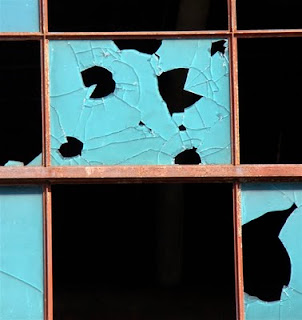 Once I moved back to Carrboro things began to change.  You can thank me next time you see me.  Now the old corner gas station where the best you could get was a Hunt's Pizza (don't ask) is now a gourmet restaurant, the Saxapahaw General Store.  (You can still get a carton of milk, a six pack and a can of Vienna Sausages.  Probably a pack of Winston's too.)  One thing that hasn't changed is the summertime Saturday early evening music shows and farmer's market, still going strong with Heather and her yellow plastic swan collecting money for the bands.

The biggest change is in the building you see above.  Now it sports the Eddy Pub, a brew pub and restaurant, and the just opened Haw River Ballroom with room for 700 music lovers.  It's gotten so hip that it's attracted the attention of the Washington Post.  That's sizzle folks.

Here's a local link to a Chapel Hill Magazine blog post but the kicker is the WaPo piece. Take a look at the gist of the article:


Within what amounts to a city block, you’ll find two casual but knock-your-socks-off restaurants (the cafe and the Eddy Pub); the Saxapahaw Artists Gallery; the home of Paperhand Puppet Intervention, a wildly popular giant-puppet theater troupe; Haw River Canoe & Kayak Co., set along the banks of the Haw River; and the just-opened Haw River Ballroom, a stunning performance hall. Just up the road, along rolling countryside, is Benjamin Vineyards and Winery.

That dilapidated building you see above?  Take a look at it now!  That's the Eddy Pub outdoor patio on the left and the stairs you see go down to the outside deck of the Haw River Ballroom.

Inside with Django Haskins and the Old Ceremony playing at the grand opening show at the Ballroom on May 27th. 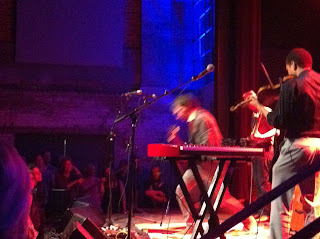 The WaPo also provides a nice link to happenings around Sax.

I'll finish this with a few more of my pictures of Sax and the Haw River.  I miss Sax but I like my 4 minute walk to work too.

Posted by Chris Beacham at 2:50 PM

Email ThisBlogThis!Share to TwitterShare to FacebookShare to Pinterest
Labels: Saxapahaw

So, your leaving is all it took for this little art ville to take off? Hmmm-I promise not to mention that to anyone in Carrboro. ; )

Ha! It really is a cool place and only about 20 minutes away.

Hunt Bros. Pizza is very good actually. I wish they still had it. I have to drive an extra 5 miles now to get it.

To each his own Mike! I hear the coffee shop has opened now. The times they are a changin'.