Awhile back I wrote about the upcoming opening of the new exhibit at the UNC-CH Ackland Museum called Carolina Collects.  The idea behind the show was to borrow and display art owned by graduates of UNC and then use the exhibit as a springboard to give people ideas on how one builds a personal art collection.

Karen and I had visited a similar show at the Smithsonian Portrait Gallery in DC where they displayed art collected by people who live in the DC metro area.  We were disappointed.  Sure there was an amazing Chuck Close and a few other pieces of interest but on the whole it was pretty humdrum.  I wondered how The Ackland would do particularly because they were drawing from a much smaller population.

Not to worry!  This is a very special collection of pieces spanning the last 200 years of art but mostly from the 20th century.

There are some lesser pieces by great artists like the Picasso (but then again Picasso's okay work is pretty damn fine).   I could do without the Rousseau which I found a rather strange composition.  I am a huge Jules Olitski fan but his piece, one of the largest in the exhibition, is a bit drab.  Okay, so it's not a perfect show.  And the Ackland is an odd space -- some rooms work and others don't but one deals with what one has.

Ahh, but the high points are very high (and there a bunch of them too!)  There is a fine Joan Mitchell (IMO one of the greatest AbEx artists) and an exciting piece by the great artist and even greater teacher Hans Hoffman.  The Marsden Hartley blew me away and the claustrophobic Alice Neel scared me a bit.  I could go on and on -- wonderful examples by Yayoi Kusama, Milton Avery, Richard Diebenkorn, Thomas Hart Benton, Gerhard Richter, Thomas Dove, etc.  Some fine sculpture too from David Smith and especially Henry Moore.  Photography as well though I'm blanking on what impressed me there.

Perhaps my favorite is by an artist I'd never heard of and I can't remember his name.  I'll be going back and I'll report on it.

Conclusion:  this is a must see for Triangle art lovers.  It's up there with the Picasso and the Allure of Language and Felrath Hines and Alma Thomas exhibits at the Nasher as best in class. 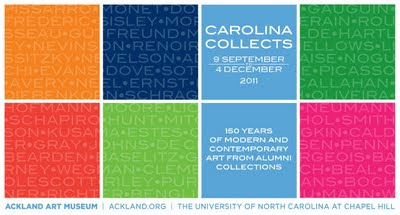