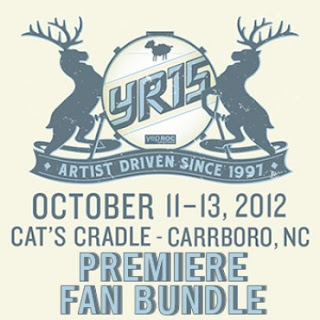 Yep Roc Records, in Haw River a bit west of Carrboro, is one of those record companies (like local Merge Records) that rarely has big platinum sellers but consistently works with new and established musicians who bring honesty and talent to their work. And occasionally they do hit the big(ger) time with bands like Arcade Fire, M. Ward, Josh Rouse and Fountains of Wayne.

Merge Records 20 year celebration back in 2009 was a big success and I'm betting that Yep Roc's 15th coming up in Carrboro and Chapel Hill in October will be too.


Yep Roc Records, the artist-driven label that proudly refuses to be labeled, will celebrate its 15th anniversary with Yep Roc 15, a three-night concert blowout October 11, 12 and 13, at the Cat’s Cradle in Carrboro, NC, featuring once-in-a-lifetime performances, collaborations, and recording sessions by current and past Yep Roc artists.

Hard to beat the lineup (with more to be added)

Plus John Wesley Harding will be the MC. Most of the music will be at Cats Cradle.

For more info and tickets go to the Yep Roc 15 Celebration website. Three-day tickets start at $80 with the Premier Fan Bundle at $170. (Warning, there are only 100 Premier tix and I already splurged for one leaving only 99 other lucky fans.) Here's a Paste online article on the event.