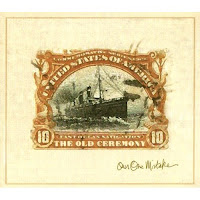 The Old Ceremony have been around a while and if you walk Main Street Carrboro or Franklin Street Chapel Hill much you'll have seen Django Haskins, lead singer and songwriter of the band.  They're a wonderful band (love the vibraphone!) and Django writes great literate pop songs.  My personal favorite is their second album Our One Mistake but you can't go wrong with their self-titled debut or the 2009 Walk on Thin Air all available here.

American Romeo from the debut is a wry tale of a young American striking out big time on his big trip over the big pond.  "Three winds to the sheets as I like to say...."

Talk Straight from Our One Mistake is a fairly angry ode to a failed relationship.  It spoke to me directly at, ahem, a particular point in my life.

Ready to Go from Walk on Thin Air is an infectious but melancholy tune that reflects a young man facing mortality.

If you like the music I implore and beg you to go to their website and plunk down the bucks. Their next local show is at Cats Cradle on April 23rd.  See you there!

BTW, I'll keep the mp3s up for two weeks.

Posted by Chris Beacham at 9:03 AM